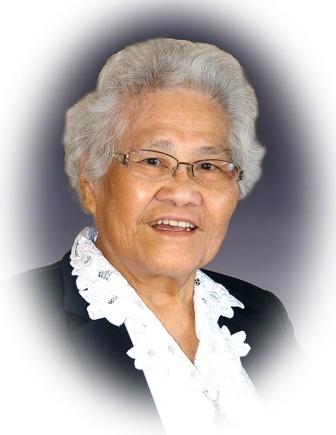 Lina Afinidad was born in Tina, Janiuay, Iloilo, Philippines on May 3, 1930 to Nicasio Afinidad and Marta Aranador, the seventh of nine children. Her father was a farmer, and Sister Lina enjoyed helping him raise vegetables, which they shared with their neighbors at harvest time. Sister Lina became a postulant of the Sisters of Providence in 1962, made first profession in 1965 and final vows in 1970.

Sister Lina began her health care ministries as an LPN in 1967 at St. Clare Hospital in Fort Benton, Mont, where she ministered for three years. In 1969 she transferred to Columbus Hospital, Great Falls, Mont. In 1974, she moved to St. Patrick Hospital in Missoula, Mont. She also ministered at the St. Joseph Care Center, Spokane, Wash. In 1989, Sister Lina was one of the five foundresses of the Providence Philippine Foundation. She was a missionary in the Philippines for 19 years.

In July 2008, Sister Lina returned to Spokane, Wash., to retire at the age of 82. She moved to St. Joseph Residence in Seattle in 2012 where she always greeted others with her lovely smile, her heart-warming personality, and beautiful flowers from the gardens at St. Joseph Residence.

To view Sr. Lina’s obituary and picture and to sign her memory book, please visit the website for Bonney-Watson Funeral Home at www.bonneywatson.com.

We Love you dearly our Tita and Lola EBO❤️❤️❤️.Rest in Peace🙏

What an amazing contribution and a remarkable work sister Lina has done ! May you Rest in Peace Tita Ebo

Your happy and bubbly personality will forever be cherished Grandma, Thank you for making our childhood memorable.Rest well to a beautiful paradise send our big hugs and kisses to relatives out there. ❤️❤️❤️❤️

RIP Tita Ebo…. We love you so much. We thank you for loving us,your whole family. You’re now in God’s hand..

God loves you! & We love you too! our dear grandma, Sr.Lina A.Afinidad.Till we meet again.
Thank you for loving and praying for us.We will surely miss you. Rest in peace.

Your memories will never be forgotten, we love you our dear grandma. Rest in peace.

May the souls of the faithful departed, through the mercy of GOD, rest in peace. Amen. Tita thanks for everything. We love you so much.

Tita Ebo aka Tita Madre aka Sr. Lina has relocated to a better place and is watching over us like she did when she was alive.
I will surely miss her.
Thank you Sisters of Providence and the Sisters of Providence staff for the love and care you have given Sr. Lina. May God bless you all. I will never forget.
Rest In Peace Tita.❤️

Tita Ebo your memories with us will always be remembered. I know you are with Mama Marit now. Rest In Peace.

We love you so much tita ebo… we will treasure our memories with you.. its because of you that we and our children are trying hard to live a holy life… please shout out the name of your apo Roden Mark, who is now on his 3rd year philosophy at San Carlos seminary, to our Lord that He will bless Roden to be a good priest someday…we will surely miss you tita

May you have eternal peace in heaven. We love ❤ you and miss you so much!

Your always in our hearts Lola EBO..gone but will never be forgotten..We love you..Rest in Peace🙏🙏🙏

To my beloved Tita (Ebo) Sister Lina Afinidad..💐May your soul rest in peace through Gods care 🙏🏼

May you rest in peace and pray for us.

May you rest in eternal peace Tita Ebo.

We Love you Tita Ebo. Rest in Peace.

Thank you for the love and kindness tita madre….you’re now in the loving arms of our Lord…Rest in peace…

Our beloved Tita Ebo and Sr. Lina to many was also my most loving and ever generous Godmother. She has made a very significant impact in my life growing up as I too dreamed and prayed to be like her in my ways. I would always remember Tita Ebo as a vibrant and colorful presence who brought so much joy to the family especially to my dear Mama, the youngest among her siblings. Tita Ebo’s life has made beautiful imprints in our hearts as she taught us life and Christian values through examples… through her selflessness, her simple and humble… Read more »

Condolence Girlie and to all of you nieces and nephews of Sr. Lina .
I remember dearly, the joy and pride that radiates in Sr. Lina when she talks about you all , also when I was with her on one of her vacations there in Iloilo. Sr. Lina’s heart is so big and so soft overflowing compassion and generosity. – Sr. Josie Lerios

Thank you.
Maraming salamat po. I rembet your visit Sister. I have sweet memories of how beautiful that time was with the family in Iloilo.

I am sure Sr. Lina, our dear Tita Ebo is very happy for the meeting of hearts of her family, friends and sisters in the SP Congregation.

Indeed, her life has been a blessing to many. She has truly lived out her vocation and her mission by being God’s instrument of love, compassion and generosity as a Sister of Providence.

Thank you. Thank you so much for lovingly caring for our dear Tita. May the Lord bless you and your beautiful mission of selfless giving… 💕🙏

Your nemories will be forever in our heart and never be forgotten…….you’ll be taking care by the Lord in heaven and your soul be Rest In Peace…….you will be miss forevermore!!!

We love you Lola Madre.
You will always be remembered as our very happy and loving lola.
May our good Lord grant you eternal rest.
🙏🏼

Your presence in our family with Beth and the kids blessed us so much. I am thanking you very much for everything – – your love, your humble and simple examples, your generosity…

May you rest in peace.

My dearest Tita Ebo…your memories will always be treasured. You are truly a blessing to all of us. The love and kindness that you have showered to me and my family will never be forgotten. May you rest in peace…love u!

Tita Ebo you will always be remembered.. we love you. TOTO JUN and FAMILY.
Rest In Peace.

A beautiful soul is never forgotten. Rest in peace

Rest in eternal peace Tita Ebo. Have a great reunion with tatay Julian & all of the relatives who have gone ahead of us🙏

You will forever be in my heart lola ebo.
Thank you for everything!

You have left this world free of pain and harm. May you rest in peace in the arms of our almighty God. Thank you Tita Ebo. We will miss you .

I am blessed to have known you, Tita Madre. God is happy to have you there in Heaven. You are now one of His angels. Please watch over us.