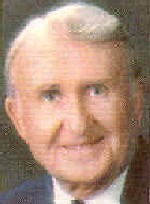 Born to Carl and Nelle Rhodes in Fresno, California in 1926, Dick Rhodes passed away peacefully on June 13, 2003 surrounded by family and close friends. A great love of family characterized Dick’s life. He is survived by Joni, beloved wife of 21 years, daughter Melinda Jim Wilker, son Brian Rhodes and stepchildren Tom Roilyn Williams, Cindi Dave Carpenter, Ken Williams and ten grandchildren. He is also survived by sister Barbara Frederick of Seattle, brother Reg Karen Rhodes of Cumming, GA. and numerous nieces and nephews. He was preceded in death by his first wife, Patricia Hegman Rhodes. Dick and Joni, residents of West Seattle, greatly enjoyed their second home in Desert Hot Springs, California and shared a passion for golf, travel and fishing. They are long time members of Rainier Golf & Country Club in Seattle and Mission Lakes Golf & Country Club in Desert Hot Springs, California. Following graduation from Queen Anne High School, Dick served in the Navy Air Corp’s V-12 flight training program during WW II. He graduated from the University of Washington, where he was a member of Delta Upsilon fraternity. After working as Director of Retail Operations at Associated Grocers, Dick founded Food Markets Northwest, which includes Queen Anne Thriftway, Admiral Thriftway and Queen Anne Thriftway at Procter in Tacoma. Widely recognized within the grocery industry as an innovator, he was voted Grocer of the Year in 1983, served as chairman of the Washington State Food Dealers in 1985 – 86 and received the Mayor’s Small Business Award in 1986. Because ”people helping people” was a life-long core belief, Dick helped found Queen Anne and West Seattle Help Lines. Over the years these Helplines have provided invaluable assistance to thousands of residents in need. This “Help Line” concept has since spread to other communities. A Celebration of Life service will be held in Seattle on Saturday, June 21, 2003 at 1:00 PM at Bethany Presbyterian Church, 1818 Queen Anne Ave. N. Map at: www.bethanypc.org. In lieu of flowers, remembrances may be sent to Queen Anne Help Line, P. O. Box 9697, Seattle, 98109; or West Seattle Help Line, 4517 California SW, Seattle, 98116; or Cancer Lifeline, 6522 Fremont Ave. N., Seattle, 98103. Arrangements are under the direction of Bonney-Watson Washington Memorial. You may sign the on line memorial guest book at, www.bonneywatson.com.

Though he was a very successful businessman, Dick truly had the common touch. I saw this when Admiral Thriftway unveiled its new look with a huge party. Many people from Associated Grocers were invited. My brother, Tracy, disabled and in a wheelchair, lived in West Seattle then and came as my “date”. Though lots of AG people wanted to congratulate Dick and get a few minutes with him, Dick engaged Tracy in quite an extended conversation. He wanted to know if Tracy was treated well when he visited the store of course he wasand what he thought of the store’s new look. From there, they moved on to sports and the news of the day. I can’t begin to tell you how impressed I was that Dick would take so much time on such an important evening to make sure one of the humblest of his customers liked the store and was enjoying himself at the party.

Dick was a very special person. My deepest sympathy to the whole family Love Pearl

I am SO sorry that we won’t be able to attend the service tomorrow to say goodbye to Dick and to give you a big old hug. Please know that we are with you in thought, and we hold you in our hearts.

Sorry to hear of Dick’s demise. He was my fishing buddy on several of Con Knutson’s fly fishing trips to the North woods. Dick was always friendly and trying to help others. You have my deepest sympathy. C.G. Stipp, MD

To Melinda and all family members: I am very sorry for the loss of your wonderful father. I am proud to have been able to work for such an innovative man.

He was in the store QA at the beginning of June and I was very happy to shake his hand and say hello to him.

He will be remembered by all who knew him.

Our thoughts and prayers are with you.

Dick was a kind and gentle man. His involvement with Queen Anne Chamber and Queen Anne Helpline was where we met Dick. His quietness was powerful. Dick was Mr. Queen Anne.

Just wanted to pay my respects to one of the true gentlemen of the retail grocery business. I have worked in the broker/direct sales part of the grocery business for many years and I do consider it a privilege to have called on and been aquainted with Dick Rhodes. He was one of the straight shooters of the business and it was always a pleasure to call on Dick and present whatever I had to give. A person always knew where they stood with Dick when it came to the business. I remember the last time I saw him, was in Medford, Oregon. I was with a crew that was resetting an Associated Grocers member store, there. We ran into Dick at the Tom-Tom restaurant there. He looked good and seemed happy to see people from the trade. It is sad to hear of his passing and this world and the grocery business has lost a true friend. My best to the family and may God bless all.

We were saddened to read about Dick’s passing in the PI. We met you and Dick at Ross Lake Resort a few years ago and have seen you up there every year since. I’m the tall person who fly fishes and cooks for the resort crew and Dorothy is the one who sings. We trust all of your good memories of Dick will bring you peace during this difficult time. We’ll miss seeing Dick at the resort this fall. We hope to see you.

Our greatest sympathy to Joni and all the family. Dick was a good friend and the nicest man we ever knew. We will miss him very much.

Dick provided an inspiration to me as an employee of Associated Grocers. He was successfull as a result of thinking of others and supporting their aspirations. Those that were touched by Dick are better for his kind words and generous support. He will be missed.

but I remember all the great stories my Dad use to tell about Dick. He was alway’s so nice to me and my sister Rene’

when we went to the store. Of course we called it my Dad’s store because when we were little we thought it was. I do know that he was loved and had alot of friends. My Dad loved working for Dick he probly would’nt have worked for anybody else that long

My Dad has great memories of Dick and the store. We all thank him for that.

When Willard died and Louie became president, he immediately recognized Dick’s skill and ability to create a first class retail store. We watched with great satisfaction as Dick received much accolade for what he had created. We send our heartfelt sympathy to all the family. Sincerely, Evelyn Arrigoni, Nancy Arrigoni,