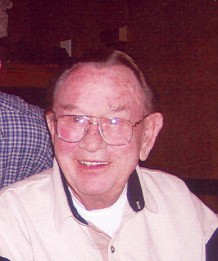 JAMES H. RIGGS
Age 84, died on April 30, 2007, in Des Moines, WA. Born on April 10, 1923, in Emida, Idaho, he had resided in the Seattle area for the past four years. James graduated from the University of Idaho where he was a member of the Delta Chi Fraternity, and went on to serve in the U.S. Coast Guard during WWII. He was a longtime member of the Spokane Moose Lodge # 161. Preceded in death by his beloved wife, Gloria, in 2003, he is survived by three children, Judy L. Rick Lucas, Seattle, WA, Gerald R. Becky Riggs, Puyallup, WA, and Jim Cindy Wilson, Portland, OR; four grandchildren, Jason, Todd, Katy and Kolby; two step-grandchildren, Brad and Bryan; one great-grandson, Hunter; two siblings, Sanford H. Riggs, Spokane, WA, and Marian Gossett, Tekoa, WA; and numerous nieces and nephews. A commemorative ceremony will be held on Monday, May 7th, at 2:00 PM at Hennessey-Smith Funeral Home, 2203 N. Division, Spokane, WA, with private inurnment to follow at Fairmont Memorial Park. Memorials to the Alzheimer’s Association, 12721 30th Ave. NE # 101, Seattle, WA 98125 or Rolling Dog Ranch Animal Sanctuary, 400 Rolling Dog Ranch Lane, Ovando, Montana 59854-9671. Arrangements entrusted to BONNEY-WATSON Parker Chapel, 900 SW 146th Street, Burien, 206 244-2320.

There just isn’t enough space to write about all the wonderful memories I have as a young girl spending time in the Riggs household. Mr. Riggs was like a second father to me. He had a way of making everything so funny, you couldn’t help but laugh. I will think of him often and miss him dearly. My heart is with Judy and her family during this difficult time.

Unfortunately, I didn’t open my email until about 5:00 P.M. today, so didn’t get to attend Jim’s memorial service. He was the friendliest teacher I had during high school – and our friendship extended for many years. He instilled in me a great love of music – and I still play the baritone horn in our church orchestra. Dick Olson, Class of 1954.

Mr. Riggs was our class sponsor for the Class of ’56 at Genesee High, He will be missed but never forgotten. Jan

Jim was class sponsor for the Class of 56, and a couple of occasions, I believe. A very nice person who will be missed by all.