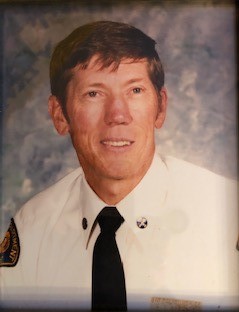 Al was a veteran of the Korean War, serving in the US Army.  After the war, he joined the Seattle Fire Department in 1954.  His leadership, compassion and care for his fellow firefighters as well as his expertise in aggressively fighting fires and saving lives propelled him to rise through the ranks during his 35-year career. He retired as Senior Deputy Chief of Operations.  A humble and modest man, Al had a saying he lived by, “It’s nice to be important, but more important to be nice.”  This trait endeared him to the firefighters he worked with during his career.  He led by example and would never ask a firefighter to do anything he would not do himself.  He never lost a firefighter at a fire he commanded.  To his dying day, Al proudly wore a Seattle Fire Department ball cap to display pride for his profession and appreciation of the firefighters he served with and those who serve today.

Al had a natural talent for building homes.  He built six homes for his family and one for each of his two daughters.  He was a perfectionist in everything he built. Al believed there was only one way to build things and that was the right way. He built a RV-4 Experimental Airplane after he retired in 1989.  The airplane was perfectly constructed and a masterpiece among home-built aircraft, as was anything he passionately and expertly built with his hands.  His hobbies included flying, hunting, fishing and playing the piano.  He built the last family home in 1978 at Crest Airport in Kent, WA and flew his Citabria airplane regularly until he reached the age of 80. Al loved the outdoors and took his family on numerous trips to Mt. Rainier.  He climbed Mt. Rainier with his son Albert, Jr. in 1966.

Al is survived by his wife Deanie, sons Albert Jr. (wife Marilyn) and Byron (wife Jessica) and daughters Julia Sprague Hilsen (husband Mark) and Meryl Reber (husband Randy).  He had 13 grandchildren and 5 greatgrandchildren.  Al was proceeded in passing by brother George and sister Joanne.  He is survived by his stepbrother Keith Craig.

Thanks for your years of service to the Seattle Fire Department

Deanie, Al Jr, Bryon and daughters(whom I have never met). Mary Jane and I were saddened to learn of the passing of Al. He was an inspiration to me from the first time I met him, when he was a Lieutenant at L11. He always greeted me with a warm smile and all of our conversations in person, on the phone and on the SFD radio were calm and respectful. William J Donohoe Jr

To all the family: You know we have you in our hearts and thoughts. So many memories over the years of friendship and times together. All our best to each of you. The entire Gagner family is thinking of you during these days, just as we have over the past years. Hugs sent to each.