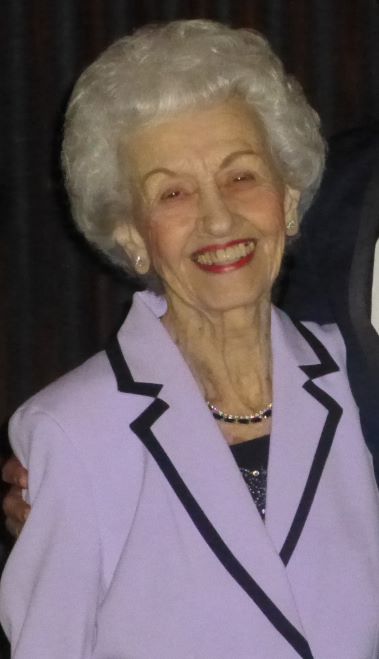 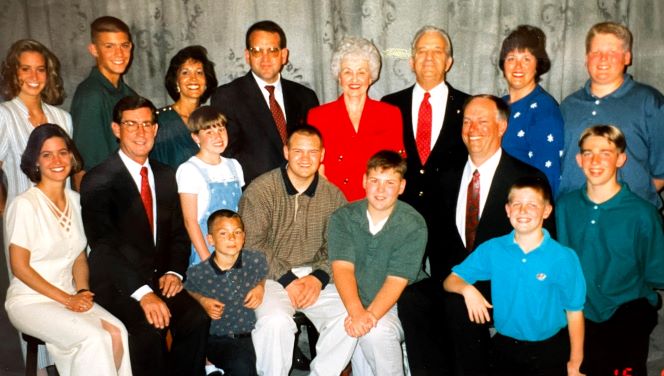 Babe died on Thursday, February 25, at Hospice Home in Tacoma after sustaining a fracture to her neck.  Before that she lived independently in her three-story home in Burien.  She was 97.  She was born in South Park on January 17, 1924, to Italian immigrants, Felix and Antoinetta Vacca where she joined siblings Rosie and Angelo. When she was two, the family moved to Sunnydale where her younger brother Tony was born.

Babe went to Sunnydale Grade School then on to Highline High School.  She graduated in 1942; she was a good athlete–tumbling was her specialty.  She was a worker from a very early age.  She worked at home and sold vegetables from the family farm, which later became Vacca’s Pumpkin Patch, well known for pumpkins at Halloween and Christmas trees.  That experience proved useful when in the early years of their marriage, she worked right alongside her husband at Yellam’s Fruits and Vegetables Stand in Holly Park.

Babe met her husband, Frank Yellam, while in high school.  He went to Cleveland.  They re-connected at a dance at Angle Lake when dances were a nickel.  They corresponded during World War II and got engaged.  They were married on June 1, 1946, at St. Francis Church, which they attended their whole lives.  They were happily married for 62 years until Frank’s passing in 2007. They raised three children, Patty (Barber), Donna (Hansen), and Frank Jr.

They lived on Des Moines Way next to her father’s truck farm for most of their lives.  Their children, nieces, nephews and many friends enjoyed endless summer days swimming in Lora Lake where cookies and Kool Aid were plentiful.  When Sea-Tac’s third runway took their beautiful home, they moved to their 3-story home about 22 years ago overlooking Highway 509 and Fred Meyer.  There was always something for her to look at.

Babe’s whole life was centered around her family, putting their needs always above her own and making them comfortable.  She kept an immaculate house, mowed her own HUGE yard, and washed her car often.  She NEVER sat down.  Her cousin nicknamed her Miss Schedule.  She had a routine and followed it faithfully. She ate organic before it was popular.  She would pick veggies from her father’s garden, right next to her home, and within a half hour she would serve them. She said she was healthy because she never smoked, drank, or colored her hair.  She was up every day by at least 6 am, had her bed perfectly made, was dressed, made coffee, and cut out the Seattle Times word puzzle.   It was her way or no way.

She and Frank enjoyed bowling with the Sons of Italy, golfing together, poker parties with the gang, and dances.  She always looked so beautiful in her taffeta dresses.  She got her hair done every Saturday and was constantly checking to see if she had her red lipstick on.  She  said people recognized her in Burien because her hairdo had not changed for 60 years—except that it had gone from black to gray.  She worked at Olympic Bowl, across from their Lora Lake home, for about 20 years and was known as the friendly waitress with the beautiful smile who could run circles around everyone.  The kitchen was her home—no matter whose it was.

Babe was an excellent cook well renowned for her tossed green salad with Italian dressing, pizzelles, snickerdoodles, applesauce, pecan pie, fried chicken, and spaghetti with tuna.  You could not enter her home without being offered cookies and coffee.  She also had an amazing green thumb.  She never killed a plant and kept fresh flowers longer by re-arranging them every day!  She helped her husband and son with the books for Frankie Boy Produce Company.  Frankies Bistro even got a taste of her organizational skills when she would fold napkins for the nightly meals. No one could fold as fast or as neat or take her job more seriously.

The Yellam family enjoyed long weekends to Salmon la Sac with the Scoccolos and Copalis Beach and Lake Meridian with cousins.  In later years, Frank and Babe enjoyed gambling and loved to drive to California or Reno and Las Vegas. Frank’s favorite city was San Francisco, home of the great Joe DiMaggio, so they would often re-visit the place of their honeymoon.  In later years, they enjoyed Emerald Queen and Muckelshoot casinos.

Babe and Frank had ten grandchildren.   Babe was right there to help with either food or how to diaper a newborn.  There are pictures of her with every one of them as babies.  They delighted in her and she in them.   The grandkids marveled at her athletic ability.  As her great grandchildren started coming, she was thrilled to meet them.  She was elated over her namesake, Mia Babe Yellam and that Rylie Marie shared her daughter Donna’s middle name.  In the last week of her life, she learned she had her 21st great grandchild, Jude Boyer Barber–the circle of life in the Yellam family. God’s timing is amazing!

Babe was a survivor.  She beat pancreatic cancer 25 years ago.  Then mouth cancer a couple years ago where her bottom teeth were removed.  She never complained of the pain from that, but that it was harder to get her red lipstick on her bottom lip.  She had a very high pain tolerance—she NEVER had Novocain when she went to the dentist.  The biggest challenge she faced in the later years was her loss of hearing.  It took her out of so many conversations and even TV and phone calls left her wanting.  She was independent to the end—pushing a walker out of her way. “I’m fine.  I don’t need it.”   Ultimately, it was the falls that got her.  Her legs were just so weak.

She was an amazing role model to all she knew with her work ethic, treating people with respect, and doing your fair share in any task you are given.  She went above and beyond for her family and attended Mass at St. Francis every Sunday for over 90 years.  The third row had her and Frank’s name on it.  As her husband would say, “It is the end of an era.”  She outlived pretty much everyone—most recently her beloved daughter Donna Marie in October, which took a big toll on her.

Babe was preceded in death by her husband Frank Yellam, daughter Donna Hansen, sister, Rose Kellington (Squire), brother Angelo Vacca (Irene), brother Tony Vacca (Betty).  She is survived by her daughter Patty Barber (Keith), son Frank Yellam Jr., son-in-law Gary, ten adoring grandchildren and their spouses, and 21 great grandchildren.  Babe was a fixture in Burien for over 95 years.  She lit up a room with her beautiful smile and LOVED everyone she met.  She will be missed forever but her legacy will live on in all who knew her. May she rest in peace.  Well done, good and faithful servant.

My mother kept a garden
A garden of the heart;
She planted all the good things,
That gave my life its start.

She turned me to the sunshine,
And encouraged me to dream:
Fostering and nurturing
The seeds of self-esteem.

And when the winds and rains came,
She protected me enough;
But not too much, she knew I’d need
To stand up strong and tough.

Her constant good example,
Always taught me right from wrong;
Markers for my pathway
To last my whole life long.

I am my Mother’s garden,
I am her legacy.
And I hope today she feels the love,
Reflected back from me.
Author Unknown

May the love and prayers be w/all of her family. We will miss her smiling smile. She was so loved by everyone. Thank You for the beautiful tribute to her. 2nd cousin. Diane

What a beautiful tribute so much to learn by her giving example.

Very nice obituary. It really captures her spirit. You always wanted her as your partner in the egg toss at the Sons of Italy picnic. I really miss her. She was such a part of my weekly schedule for so long.

Patty Keith and family a beautiful tribute to an amazing woman so loved by her family. May memories help to lessen the sadness in your hearts . Thinking and praying for you

We pray God will grant you His peace and strengthen you during these difficult days as you mourn the loss of your Mom. Love Elna and Merlyn

This is such a perfect and loving tribute to our Grandma. There were so many special parts to her and this captures who she was so well. “A fixture in Burien.” Uncle Gary, I love your comment, that you always wanted her as your egg toss partner. All the little memories we forget but when mentioned bring us right back to those moments. So true. She was NEVER sitting down and always actively cleaning or preparing something. Always a wonderful hostess. We cherish the legacy she created and has passed on.

Beautiful tribute for your beautiful mom, Patty. I feel like I know her, just by reading these lovely words. May she rest in peace, and peace to you and your family.
Love, Joanne Vanni Furgason

I loved reading her obituary, as I learned about the Babe before my time in the family. What a life well-lived and a beautiful tribute.

I remember her sparking eyes and beautiful smile. I also remember how she and my mother would laugh together, truly close cousins. My thoughts are with you Patty& Frankie and the entire family. She was such a blessing to all. Jeannie Scarpello.

Funeral Mass (By invitation only)

Cryptside service (By Invitation only)

Funeral Mass at St. Francis will be livestreamed at 10:30 am. You can watch on FB at https://www.facebook.com/STFOAPARISHBURIEN/ If the video isn’t at the top of the page, you can click on the Watch icon at the bottom or look for the video link. The video should be there. If you don’t have FB, you can watch it on You Tube, but it may be delayed. Go to https://www.youtube.com/c/StFrancisofAssisiBurien