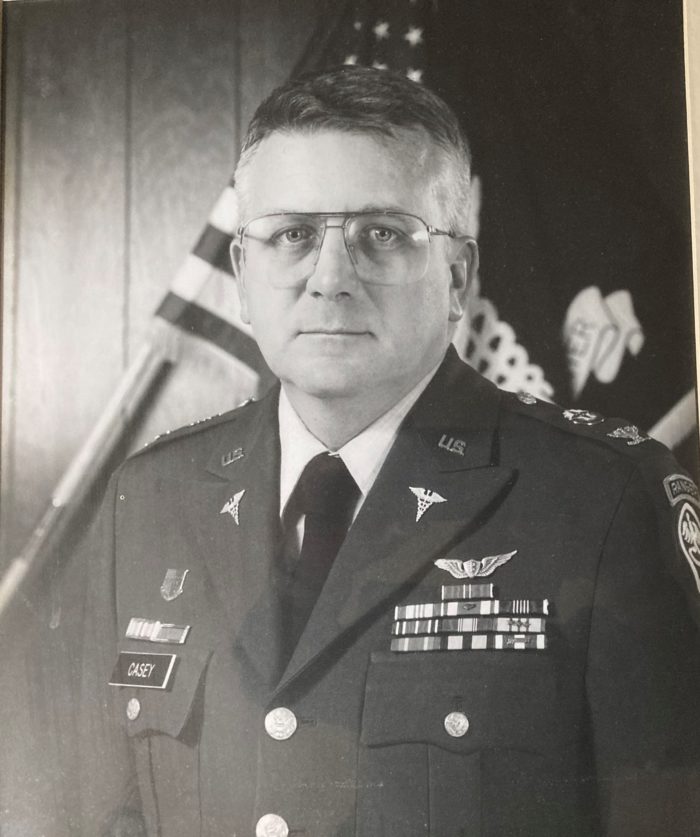 Mike was born and raised in the Chicago, IL area and attended West Point Military Academy from 1964-1967 and served as a Signal Corps Officer in Vietnam (1967-1968). Upon returning from Vietnam, Mike attended Loyola School of Medicine College obtaining his MD in 1973.  Mike also attended and graduated from the ICAF (Industrial College of Armed Force) in Washington DC in 1981.

Mike served in the US Army for over 30 years as a Flight Surgeon/Prevention Medicine Officer with more than 10 tours of duty including other roles such as Deputy Commander of Madigan Medical Center at Ft Lewis WA, Commander Womack Army Hospital Ft Bragg NC and 18th Medcom Commander, Seoul, South Korea.

Mike was a member of St. Theresa RC Church in Federal Way, WA as well as member/sponsor  of the Seattle Theater and Music community and an avid Seattle Seahawks fan, being a seasoned ticket holder for >20 years.

Mike’s legacy of accomplishments and devotion to country, God and family will be missed by all that knew and served under him.

Mike will be remembered and his life celebrated in future commemorative services at St. Theresa RC Church in Federal Way, WA and Tahoma Military Cemetery in Kent, WA.

The family requests that memorial gifts be made in support of lymphoma research at UW Medicine. Checks should be made payable to the “UW Foundation-Lymphoma Program” and mailed to: UW Foundation, Box 359505, Seattle, WA 98195. Please indicate that the gift is in memory of Dr. Mike Casey or you may make a gift online at  https://online.gifts.washington.edu/peer2peer/campaign/lymphoma-research.”

So sorry to hear of Mike’s passing. Worked with him in Preventive Medicine at MAMC while he was I Corps Surgeon and Commander at MAMC.

such a loss to his family, and the Madigan family

He was a great friend to my husband, Bill Carroll and myself for many years. Mike will be truly missed.

We were shocked and saddened to learn that Mike has left us much too soon. He was a distinctly outstanding military officer, superb physician, loving husband and a wonderful friend. May he rest in peace!

Our hearts are sad for your loss. Mike was an amazing man and most certainly has left a hole in your hearts. Hugs and prayers to each of you.

I’ll always love you and never forget our times together

I use to greet with Mike and Linda at St. Theresa. He will be missed by all. I will ask Joan of Arc, my patron Saint, to intercede on his safe journey to heaven.

Mike was a great mentor and role model for all of us. He was a great American. Linda is a beautiful person and dear friend who warms everyone’s hearts. All blessings to both.

I am so sorry to hear that Mike has passed away. He was a wonderful Army Officer. I enjoyed serving with him and enjoyed friendship with both Mike and Linda. Very sad news!

Dr. Casey will be truly missed. Such a great man with such a BIG heart always quick to give his time and what great stories he had. I will miss you Dr. Casey!!!

Linda you will be in my prayers. God Bless

Dear Linda, I am truly sorry for your loss. Sincerely, Ellen Odd

A truly amazing man who I admire, respect and love. It was an honor to have shared time with him and by the grace of God I hope to meet again in our Fathers home. Mike, may you Rest In Peace.