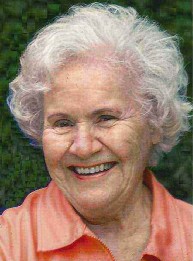 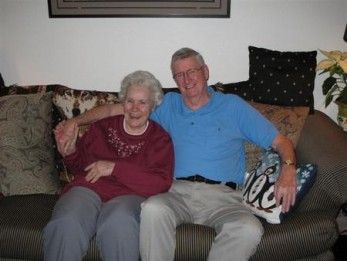 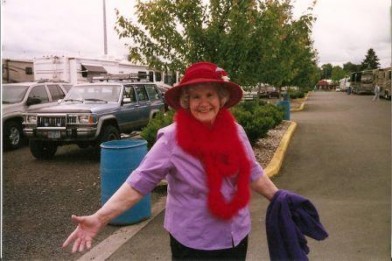 Jane Elizabeth Brown, age 86, passed away on September 15th. She was born
in Erie, Pennsylvania to Fred and Mary Whiting. She and her first husband,
Curt Rhodes, moved to Washington in 1954 where they settled in Normandy
Park. Later, Jane and Don Brown, her current husband of 31 years, resided
in Burien and Federal Way.

She was preceded in death by sister Mary Alice Gee of Conneaut, Ohio, and
brothers Harold and Richard Whiting of Erie, and Warren Whiting of Portland,
Oregon. She is survived by her husband Don, her children Ken Rhodes, Janet
Rhodes, and Carol Gillespie Rick in the Seattle area and Ron Rhodes
Shirley of Rochester, Minnesota; also, stepchildren Nancy Richard
Roberge, Paul Susan, and Roger Brown Sharon in the Seattle area, three
grandchildren and five step-grandchildren; and her beloved nieces and
nephews.

Jane and Don were active members of the Lewis & Clark Chapter of the Family
Motor Coach Assn. and the Burien Elks Spikehorn RV Club. She enjoyed RVing,
gardening, reading, painting, crafts, and rooting for the Mariners,
Seahawks, and Huskies.

Jane served in the US Naval Reserve WAVES during World War II. Before her
retirement, she was employed as a medical transcriptionist. A private
family gathering will be held at the Tahoma National Veterans Cemetery.

In lieu of flowers, memorials may be sent to PAWS or the Pediatric Interim
Care Center www.picc.net.

‘Don’t Cry Because It’s Over, Laugh Because It Happened’

Don, she was very nice lady, I’m sorry to hear of your loss. Paul Codd

Carol and to all your family we send our Love and our Condolences. May God Bless all of you and help you in this time of mourning.The Nieto Family….

Our thoughts and prayers are with you and your family during this time. Clark shared with me how your mom would remember him and it had something to do with eggs. I assume you will understand. I see in her pictures that she was part of the Red Hat Club and I wish I had met her as I always wanted to know someone in that club. Please let us know if we can do anything and we would love to have a toast to your mom….love you lots

I allways loved my Aunt Jane, She was my last aunt or Uncle,She was not a lot older than I,12 years is all, and we all lived together on the east side of Cleveland, and later when we moved to Conneaut because my Dad got called back to work on The Nickel Plate Rail Road we would ride the train Visit Gramma and aunt Jane, Uncle Warren lived there too, I remember sitting on the porch on hot summer evenings and having a Boston Cooler Wow that was wonderful,

I offer my condolences to my cousins and second cousins, and Uncle Don

My deepest sympathies to you Ken, Ron, Janet, and Carol on the loss of your mother. She gave it her all. She was a special aunt to me. I truly enjoyed the summer I spent at your house the summer of 1965 when you all were quite young. It meant so much to me to have spent the week with your mother and Don in their home just a few years ago. Memories are precious; hang onto them.

Aunt Jane was a special lady. She tried to keep in touch with the Whiting family best she could. Harold her brother and my father corresponded often. I have a notebook of letters both wrote. They were characters and wrote amusing letters. I am so glad I got to meet some of my cousins when we were visiting Aunt Jane and Uncle Don. They treated us like we had been best buddies forever. We will miss Aunt Jane but we will never forget her. She was a fighter but now she is with others who went before her. Keep in touch. Your Erie Cousins Donna and Allen Standley

Jane and my mom, Lyla, met while in the hospital having their first sons both named Ken. They continued to stay in touch and as we got old enough we started to get together for play times and overnight stays. I remember many days spent at the Rhodes home in Normandy Park. We the kids had a number of crazy schemes that we were always thinking up but Jane and my mom were very tolerant of our wild ideas. The 4 boys at one point decided to start a rock band this was during the 60’s and we were going to be the next Beatles even though we didn’t play any instruments. We built a stage in their basement, practiced singing for about 30 minutes and then invited the moms to come and listen. As we started singing Jane screamed just like a typical Beatles fan and we were so shocked we didn’t know what to do except to hide behind the stage! So ended the promising career of the next great rock band. You are all in my thoughts and prayers.

Thank you for letting us know, Carol. We send our love and hugs your way. We are so sorry for your loss. Sandy, Nora, and Sara

I’m going to miss my momma forever. As Mom said very recently, we may fight a lot, but we love each other. I guess that’s what happens when 2 people are so much alike…not that either of us ever admitted it. My heart is shattered. I love you Momma.