Joe was born in Tyrone, LA to Jesse Bushnell and Leona Bushnell on February 14, 1940. He went to school in Eunice, Louisiana. Joe grew up with a large extended Creole family of aunts, uncles, nieces and nephews. At the age of 18, Joe left Louisiana to join his father and start a new life in Seattle, WA.

He married Sylvia Ruth Taylor on March 21, 1969 in Seattle. With his wife, he worked to raise their two daughters and travel the world. He was a riveter for The Boeing Co. for 10 years. He went to work for Safeway Stores in the beverage warehouse & retired after 26 years. He was an entrepreneur at heart, his most accomplished and truly his passion in life was Broussards Creole Seasoning, a Cajun Creole Spice he created more than forty years ago, sold locally in stores and restaurants. Joe also enjoyed a good game of poker at his house after he had cooked a great Gumbo.

Joe is survived by his wife Sylvia, daughters, Stephanie Durham, Kelly Hamamoto (Alex), sister Willie Mae Reeves, grandson’s Andrew Durham and Hideo Hamamoto, Corey Durham, great granddaughter, Armani Durham, sister-in-law Barbara Taylor-Smith (Mike). There are a host of nieces and nephews that Joe leaves behind. He had special relationships with most of them and they were a source of great joy.

The family wishes to extend their sincere thanks to Evergreen Health Hospice and the Alzheimer’s Association for their support.

I have fought a good fight, I have finished my course, I have kept the faith
II Timothy 4:7 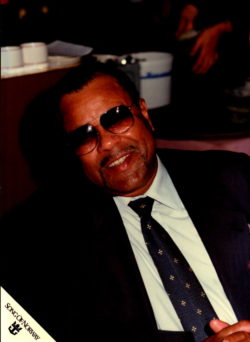