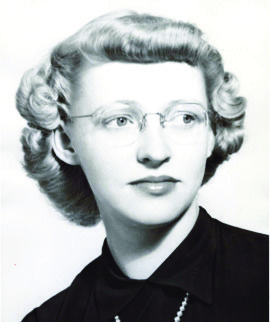 Naomi Marchant Pearson Lopez (Naomi) passed peacefully on October 31, 2021 in her home at the age of 95. She was born on August 10, 1926, on the family dairy farm two miles outside of Oakley, Utah. Naomi was the youngest of thirteen children (10 which survived to adulthood) of Levi Pearson (his two predeceased wives) and Mary Marchant. After the death of her brother at two years of age, she was the answer to the family’s prayers when she was born and consequently the entire family doted on “the beautiful red-headed baby”. Living in a small town she had one sister who was her fifth grade teacher and a brother who was the principal at the neighboring high school. Her best friend was her niece. During high school, Naomi used her hard-earned savings of $100 dollars to take flying lessons at $10 per lesson. On the 10th lesson, she soloed then retired from active piloting. Having placed second in a statewide 4H contest for dressmaking, Naomi graduated from South Summit High School in May 1944 and received a 4H scholarship to attend Utah State College. In 1948, Naomi graduated from Utah State with a degree in foods and nutrition, to the chagrin of her brothers who thought she should major in a science. Naomi was a member of Phi U, the honorary Home Economics sorority. While at Utah State, Naomi met her future husband N. Edward Lopez, who was recently discharged from the Army Air Corps, and attending college on the GI bill. Naomi and Ed were married in Logan, Utah in 1947. Following the birth of their first child Nolan in1949 and Robert in 1950, Naomi and Ed moved their young family to Seattle, Washington in May 1951 when Ed took a job at the Boeing Airplane Company. In 1953 and 1954 to help support the family, Naomi worked at Table Foods, a company that made store branded products for Safeway. Having excelled in chemistry, Naomi was in charge of the company laboratory that tested the food products as well as other parts of the plant. Naomi temporarily left the work force when her daughter Marilee was born in 1954 and her last child Ron was born in 1957. In 1960 and 1961 Naomi worked for Highline Hospital as a relief dietitian. In 1962 she moved to Standring Osteopathic Hospital where she was the part time kitchen manager and dietitian. In 1962 Naomi left the work force to raise her family. When her last child left for college in 1976, Naomi went to work for Senior Services of Seattle, where she supervised “meals on wheels” as well as dozens of senior centers around King County. After a 20-year career, she retired in 1996.

Naomi loved to entertain, decorate and garden. Her home, her family and her friends were her pride and joy. She enjoyed putting on a feast and spending time with her family and friends. Her yard was always well tended and over the years she belonged to garden clubs and loved the connections and information she gained. She had a can do spirit that had her up on her roof clearing leaves and gutters well into her 80s (and was properly chastised by her family and contractors for doing so). She was a fabulous seamstress and tailor. She started swimming regularly in her 50s after major back surgery and continued until Highline Swim Club closed. In addition she was a voracious reader and belonged to at least one book club that she attended up until the last few years of her life.

Naomi and Ed loved the Pacific Northwest including boating, hiking, snow skiing, water skiing and camping with the family. They were avid and accomplished ballroom dancers. As active members of Lake Burien Presbyterian Church commencing in the 1950s, Naomi and Ed enjoyed a wonderful community of many other young couples who became life-long friends. With the kids grown up, they travelled extensively, enjoying trips to Thailand, China, Mexico and Spain.

After 41 years of marriage, in 1988, Naomi’s husband, Ed passed away. Several years later, Naomi ran into an old Lake Burien friend from the 1950s, Bill Dow who was also widowed. Naomi and Bill spent the next 20 or so years together as a couple splitting their time between her home and Bainbridge Island. Naomi and Bill enjoyed traveling (extensively) together, watching the Mariners, attending UW football games as well as visiting with their respective families and many grandchildren. As a devoted companion, Naomi helped care for Bill until his death at 98 in 2013. In her final days and weeks, Naomi was surrounded by her children and grandchildren.

She was preceded in death by her husband Ed, her son Nolan and his wife Dora and all of her siblings. Naomi is survived by her son Robert Lopez and his wife Adrienne Salvail), her daughter Marilee Barth (and her husband Thomas A. Barth) and her son Ronald Lopez (and his wife Angela Karikas) and her grandchildren, Jaclyn Jutlia (her husband Jerry), Katherine Barth, Thomas E. Barth, Alyssa Lopez and Alexandra Lopez as well as a great grandson Dalton Jutlia. In addition Sean Weckhorst, her step great-grandson and his partner and children as well as step grandson Patrick Martinez and step granddaughter Jessica Martinez and their families.

We would like to thank her many caregivers from Comfort Keepers over the last few years of her life including Patsie, Christine, Laura, Ann, Georgeann, and Sandra.

A memorial service is planned for November 27 at 11am at Bonney-Watson Washington Memorial Park, 16445 International Blvd, SeaTac, WA. Any Remembrances may be made to Swedish Hospital Cancer Institute (747 Broadway, Seattle, 98122) or a charity of your choice.

We would like to express our appreciation for the years our father, Bill Dow and Naomi spent together sharing their mutual interests, travel and time with family. Please accept our deepest sympathy. Mary Ann Dow, Richard Dow, Kathy Dow and Family

Greetings to Ron and all of your family. While it’s been over 50 years since I lived in Shorewood, I do remember your mother who seemed to me to possess those qualities of an ideal and caring mom. Whether she proffered food or snacks, she was attentive, but not intrusive; and she was always supportive of our school projects and friendship. Reading her life story, I am not surprised by the thoughtful and caring manner in which she lived. I’m sorry to hear of her passing and I wish you and your family all the best!