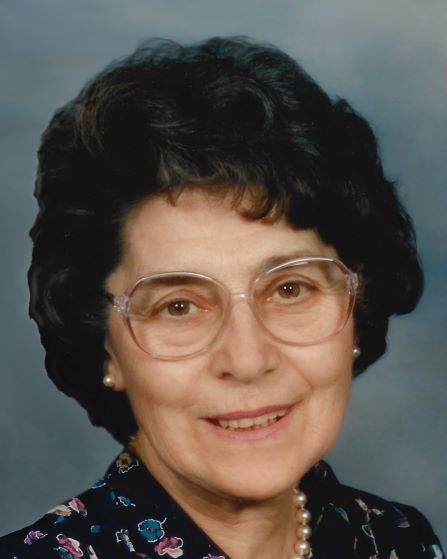 Prudence V. Fantello passed away peacefully Sunday, August 16, 2020, after a courageous battle with breast cancer at the age of 95. She was a wife, a mother, a grandmother, a great-grandmother, a sister, a daughter, an auntie, a niece, a cousin, a friend and at times much more.

Prudence was born in Seattle on February 26, 1925 and lived in the Rainier Valley area. Interestingly, her mother had cared for numerous homebound friends inflicted with influenza during the worldwide pandemic of 1918, and, while she, indeed, survived the pandemic, later suffered long term symptoms of exposure because of having cared for others who were seriously ill. From an early age, Prudence quite literally became the “woman of the house” helping to care for her ill mother and her two younger brothers enduring some very difficult times. Prudence’s father was already challenged running his Seattle farm and finally remedied the situation for his three children by sending them to Italy to reside with and be cared for by their grandmother in Mirabella Eclano, Calore, Italy. After the long sea voyage to Italy, Prudence’s life improved nearly overnight by being in the loving care of her grandmother and in the company of several older aunts and uncles who became her sisters and brothers. She often shared how well she was treated by her grandmother and sister-like aunts, and for once was the center of attention being cared for and doted upon instead of herself caring for others. Prudence’s mother eventually succumbed to her illness while in the care of her family. Because of Prudence’s exceptional aptitude and desire to learn, her father sent her to attend private schooling at a local convent near her grandmother’s home. This provided her with a level of academic challenge that made it possible for Prudence to maximize her unique potential and to excel in her studies.

In 1945 as WWII was ending, Prudence’s father decided it was safe for her and his son, Jimmy (Vincenzo), to return to the USA. The youngest son, Crescenzo, had died while in Italy. Despite all the challenges Prudence faced until that point in her young life, the next challenge to overcome is a telling testimony of her unique fortitude, self-discipline, courage, intellect, and strength of character. Upon returning to the USA at the age of 20, here was a young woman who commenced her schooling immediately as a sophomore with no prior formal education in English — and, yet was able to keep up with her classmates for the subsequent three years without being held back for remedial learning, then graduated on time as a senior with the same class members she matriculated with three years earlier — and, did so with exceptional grades — all while acquiring an extraordinary grasp of the English language. With hard work and the help of family, friends, dedicated teachers and guidance counselors, she excelled. At graduation ceremonies from Renton High School, Prudence was awarded “Most Inspirational Girl” of her graduating class — as unanimously voted upon by the high school faculty and her classmates. She dealt with many challenges in her life, and with her strength and perseverance, she overcame most all of them.

In 1953, she married her husband, Tony, after a very old-fashioned courtship and began to build a life and family of her own. She was a very talented woman that could do almost anything to which she put her mind. Her cooking and baking was amazing, having served many large holiday family gatherings and friends. What is considered artisan and popular today, she was doing 50 years ago. She farmed, gardened and operated (with her husband) a specialty vegetable and herb farm that served many of the region’s top chefs and restaurants for many years. When you visited, you could not leave her house without having something to eat (Mangia! Mangia!!) and you could not leave without a trunk load of vegetables, flowers, and more. Some of her hobbies included making artisan herbal infused vinegars, weaving garlic braids, sewing, and helping with her children’s activities whenever possible. She was very generous with her time, talent and treasure, always sharing and giving away what she had. She valued God and family above all else. Prudence was preceded in death by her husband of 63 years, Anthony J. (Tony) Fantello, her Parents Raffaele and Luisa Vacca, her brother Vincenzo (Jimmy) Vacca, her brother Crescenzo (Chris) Vacca, and her in-laws, Dominic and Filomena Fantello, and other loved ones, as well. Prudence is survived by her daughter, Rita M. Nauer (Ron), son Tony Fantello (Kathi), three grandchildren (Tony Fantello, Jr. (Hannah), Andrea Daulbaugh (Jon) and Ally Nauer), and two-plus one on the way great-grandchildren (Bennett Daulbaugh, Ezekiel Daulbaugh and baby-girl Fantello), her aunt Italia Vacca Ciampa, her sister-in-law’s Gerardina Vacca and Mary (Fantello) Scoccolo, and many cousins, nieces, nephews, godchildren, and friends. The family would like to thank the doctors and nurses of Valley UW Medicine; local Fire and Rescue Dept’s, and several private doctors, nurses and caregivers. In lieu of flowers, donations can be made to St. Jude’s Children’s Research Hospital, Memphis, Tennessee. A funeral mass will be on September 4, 2020 at 11 a.m. at St. Stephen the Martyr Parish, Renton, WA. Rosary at 10:15 a.m. Entombment at 2 p.m. at Bonney-Watson Washington Memorial Park, SeaTac, WA. Unfortunately, due to COVID-19 concerns and rules, attendance at both events will be severely limited. A celebration of life may be held sometime in the future. For more information, such as to attend the funeral and entombment services by video livestream, please see below and/or visit www.BonneyWatson.com.

BONNEY WATSON is inviting you to a scheduled Zoom meeting.

****PLEASE MUTE YOUR AUDIO UPON ENTRANCE TO THE ZOOM MEETING. THANK-YOU****

Mrs. Fantello was a very dear friend of my wife Paula and I for almost 40 years. We enjoyed or visits with Prudence and Tony Sr. Mrs. Fantello made her special Easter Bread for us every year. We were introduced to Mr. and Mrs. Fantello by Tony Jr. when we worked together in consulting and Pierce County. I will miss our visits in the last year or two and many discussions of gardening and of course her family. I know that when Easter comes around, I’ll think of her and her special bread that we enjoyed for many years. We only have fond memories of Mrs. Fantello – dear sweet Prudence.

A BEAUTIFUL SOUL IS NEVER FORGOTTEN.
Such a true statement of Auntie Prudence!
Memories of her will be with us forever. The large family Thanksgiving and Easter celebrations, her soft spoken voice and her many talents. Always so gentle and kind.
On behalf of our entire family (Mary (Fantello) Scoccolo, Donna, Nancy, JoAnn) we wish you healing and peace in this difficult time.
Gone from our sight, but never from our hearts. Rest in peace Auntie.