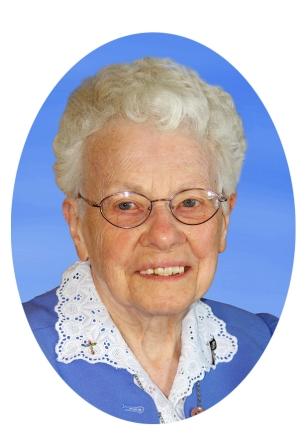 Sister Rita Marie Ferschweiler, SP, age 102, a Sister of Providence for 76 years, died April 25, 2020, at St. Joseph Residence, Seattle, Wash. The dates and times of the vigil and funeral service are pending. Bonney Watson Funeral Home is in charge of arrangements.

Sister Rita was born in St. Louis, Ore., to Lawrence Ferschweiler and Marie Rubens on March 16, 1918, the year that marked the beginning of the Spanish flu pandemic. She was the eldest of six children, and grew up milking cows and picking hops and berries.

In the fall of 2011, Sister Rita moved to St. Joseph Residence, Seattle. She was the recipient of many awards during her nursing and administration ministries, including being named by The Oregon Journal as one of Oregon’s 10 women of accomplishment in 1971. In May 2012, Sister Rita was honored by Providence St. Vincent Hospital with a “Peace Garden” for her many years of dedicated ministry to the Providence medical community in Oregon. Her true joy came from relationships and helping others in need, including reading to those with failing eyesight.

Sister Rita is preceded in death by her parents; her brothers, Thomas and Cyril; and sisters, Doris and Rosemary. She is survived by her brother Lloyd and many nieces and nephews, grand-nieces and grand-nephews.

Memorial contributions may be made to the Sisters of Providence Retirement Fund, 1801 Lind Avenue SW, M1-C, Renton, Washington, 98057. To view Sister Rita’s obituary with her picture and to sign her memory book, please visit the website for Bonney-Watson Funeral Home at bonneywatson.com.

I am so sorry about loss of your love ones , I hope this bring comfort to the family.
In the book of John 5:28,29. Jesus promised a resurrection to life for everyone.

Sister Rita was an inspiration at Providence St. Peter Hospital in Olympia. Her presence brought a peaceful air to every room. She contributed much to our hospital, especially as a constant reminder that ours was not simply a job but also a mission. She will be missed.
George Chappell, MD

Sister Rita was a bright spot in the day when she visited the floors. She was a non judgmental person, kind to all those she met..
What a wonderful life she had,

Sister Rita & her family are so well loved down here in Oregon where she grew up. Our oldest sister who is with the Holy Names nuns knew her before us, but we might have met her and know we met her sibblings years ago not realizing it. Their family has a small cemetery attached to the historic church. Our great grandmother, grand aunt, grandmother, parents, cousins & others are all buried there. When we got to know her best she was at Providence in NE Portland. She visited with our mother when she was in the hospital, I believe… Read more »

St. Mary Laureen hired me when I went to work at St Vincent Hospital in 1963. I will never forget her! An amazing person.

My mother: Rita LeBrun – Gross grew up with Sister Rita in St Louis, Or and was very fond of her and following her career with Providence. My happiest memories of Sister Rita was her wonderful visits to me upon the births of my four daughters at St. Vincent’s Hospital in the 50’s & 60’s! She always had a marvelously energetic aura as well as a healing emissary of the Good Lord. One in a million blessed woman!

So sad to have heard this news. Sr. Rita was loved by all. I had the pleasure of working at her side during my 10 years at St. Peter as COO and then CEO. I recall a very funny thing she said once as we both overheard someone refer to “St. Peter’s Hospital.” Though the young man who said those words was at least a foot taller than Sr. Rita, she was clearly “looking down on him” when she instructed him that “St. Peter was neither plural nor was he possessive.” I think I told that story at every “New… Read more »

I met Sister Mary Laureen in 1961 when, as a newcomer to Portland, she interviewed me for a part-time nursing position at the original St Vincent Hospital. I recall her kind and friendly manner. She was an effective and caring leader for nursing staff. I remember her gentle smile. May she rest in peace.