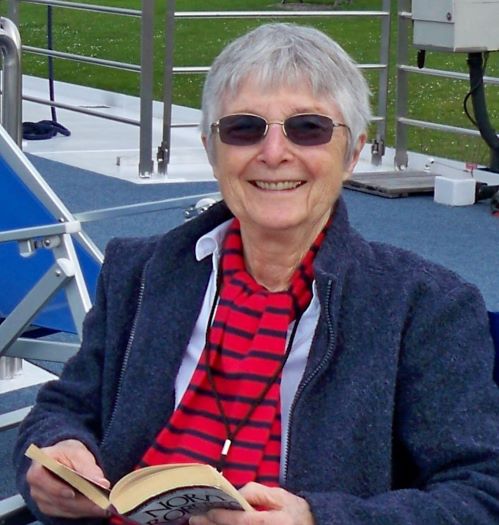 Shirley was born in Seattle in 1935 and graduated from Foster High School in Tukwila in 1953. She enrolled in Western Washington College in Bellingham where she met William (Bill) Baumgart. They were married for more than 57 years – from 1955 until Bill’s death in 2012.

When the children were older, Shirley went back to school, earning her AA degree in 1979 from Highline Community College. Afterwards, she worked for 25 years as an aide in the Office Occupations department at Highline.

Shirley and Bill raised their four children – and her beloved dog, Ruffles – in Des Moines, Washington. In 1979, they purchased vacation property on Pickering Passage near Shelton, where they moved full-time in 2004, enjoying the beautiful morning sunrises and the star-filled night skies along the beach. Following Bill’s death in 2012, Shirley moved to the Panorama Retirement Community in Lacey.

Over the years, Shirley was able to fulfill her passion for traveling by visiting most parts of the world, including trips to Thailand, China, England, Ireland, Mexico, South America, Russia, Yugoslavia, and the many other countries of both Western and Eastern Europe. She also took cruises to Alaska (on several occasions), the islands of Hawaii and Tahiti, along Latin America, around South America, along the coast of Norway, around the Mediterranean Sea, in the Caribbean, through the Panama Canal, and across the Atlantic Ocean on the Queen Mary 2. Her last trip was a cruise down the Seine River with her daughter, Pam.

Her worldwide travels gave her plenty of opportunity to pursue her love of taking pictures. She had nearly 70 photo albums cataloguing her life – of her childhood, of raising her children, of her extensive travels, and of the family gatherings that were so special to her.

When she wasn’t traveling, Shirley liked to spend her time doing jigsaw puzzles as well as knitting and counted cross stitch. Later in life, she discovered opera, and watched a different opera online nearly every day throughout the COVID pandemic. And if you needed to find her, you could always be assured that at 3:00 every afternoon, Shirley would be enjoying a glass of wine and piece of chocolate.

Remembrances may be made to a cause close to Shirley’s heart by donating to the Multiple Sclerosis Society, PO Box 91891, Washington, DC 20090, www.nationalmssociety.org.

We send our condolences to Shirley’s family and everyone who was touched by her life.

Shirley was always extremely kind and generous to us, including supporting us in our annual Walk MS events. Her love of photography was evident in her annual photo highlights of the previous year that she included in her Christmas cards.

We fondly recall a trip that Shirley and Bill made to Chicago years ago. They were determined to have dinner at Harry Caray’s Italian Steakhouse in River North, and so we accompanied them to the restaurant. We had a marvelous evening together.

Shirley lived life to its fullest. We hope that each person’s memories of her hold a permanent place in their hearts.

Shirley will be missed. Her love of Puzzles, Pictures and her trips. She shared this in letters and pictures to the family. In the last few years with all our ages we haven’t seen her but we do have good memories of our childhood outings and visits with her. Shirley and Bill went on lots of trips and did some trips with Larry and Carol Wheeler her cousin. All the years we had family reunions at their home on the sound. Lots of fond memories.

We have known Bill and Shirley since 1968 when I became a teacher and coach at Foster High School. One of the early welcomes was a gathering at their home of all the coaches and wives. As fond as I was of Bill, it was Shirley who gave us out first memory about “family” when she took Cece and introduced her to other wives. As the years passed I was lucky enough to have two of their children as students: Melanie and Matthew. It was easy to see the influence Shirley had on them as they both were in speech-debate and were the valedictorians of their respective classes. Shirley was a special lady, a truly special person.